As a secondary school math and science teacher Michael Gorman had his summers free to travel and cultivate his passion — fly fishing. In the early 80’s he left his secure job behind to “live the dream” by opening the Scarlet Ibis Fly Shop in Corvallis, OR. In addition to managing the day-to-day operation of the his retail store, Michael was also the head guide for clients who wanted to experience the trout and steelhead fishing on the McKenzie, Deschutes, Santiam, Willamette, Rogue and a host of central and northern Oregon coastal steelhead rivers. With the nearby proximity of the Alsea and Siletz Rivers, learning the nuances of catching winter steelhead on the fly was both an engaging challenge and good business. A frequent guest speaker in the fly fishing and steelhead fishing classes at Oregon State University, he was eventually asked to teach these classes, where he did so for 27 years, and continues to teach at his alma mater today. After selling his fly shop in 2000 Michael expanded his guiding operation and dedicated more time to writing and photography. With numerous magazine articles to his credit he has also authored two published books: Steelhead Fly Angling, Guerilla Fly Rod Tactics (Frank Amato Books 2012) and Effective Stillwater Fly Fishing (Stackpole Books 2014). A third book, a significant portion of which is dedicated to nymph fishing for steelhead, is due out by the end 2015.

Steelhead fly anglers relish the early and late hours of the fishing day when the sunlight is not directly on the piece of river into which they are casting. The fish are in a much better mood to strike a swinging wet fly when the light is low. So, of course, my fishing and guiding challenge was to find a fly pattern that will continue to entice steelhead even when the sun is high. For me that go-to fly is my rendition of the Red-Wing Blackbird. In this day when Intruder-style wet flies are all the rage the Blackbird is definitely Old School, with a chenille body and down-eye hook, but the fish aren’t as fashion conscious as are some fly fishermen. Fished on a sinking tip fly line or heavy sinking shooting head I want the fly near the river bottom swimming slowly across the current. Good mending is imperative for the slowest possible swing of the fly.

Tying tips Keep the fly body silhouette reasonably lean, and make sure the wing only slightly exceeds the body length. Limit the use of the holographic tinsel in the fly — three strands in the wing and a single in the tail are just right. I don’t finish with head cement because of the scent. 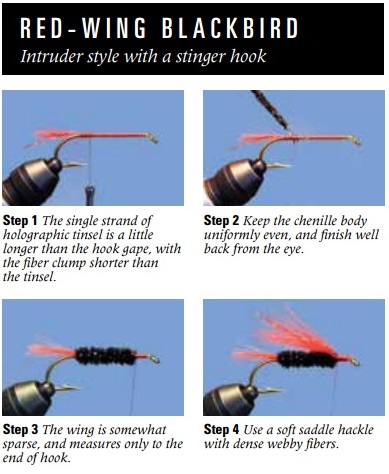